4s vs 3d, which subshell has the higher energy level?

Some of us may have learn this phrase “First In, First Out” or “FIFO” regarding 4s vs 3d. But why is the 4s orbital filled first?

Ans: The simple answer is because 4s orbital is lower in energy than 3d orbital when they are empty. 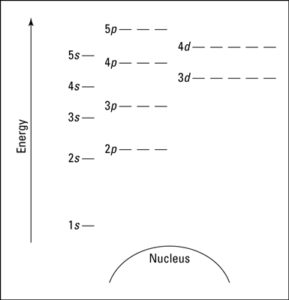 Qn: But isn’t principle quantum n=3 supposed to have lower energy than n=4?

Ans: Generally yes, but within the quantum shell, each subshell has slightly different energy levels due to their differing distance from the nucleus (when the subshell is further away from the nucleus, it has higher energy, as it experiences weaker attractive force) . It so happens that because of their shapes, there is an overlap between 3d and 4s orbitals energy levels, but they are very close in energy levels, which explains why transition elements can lose both 3d and 4s electrons to have variable oxidation states.

Qn: Woah. Wait, then why after filling the 3d orbitals, the 4s becomes higher in energy level?

Ans: Once 3d orbitals are occupied by electrons, like in the case of transition elements, because they are closer to the nucleus, they will repel the 4s electrons further away from the nucleus and cause it to have higher energy level. So this explains why even though we fill the 4s before 3d orbitals, we will still ionize 4s electrons before 3d electrons.

Ans: A symmetrical distribution (half/fully-filled subshell) of electron density results in a more stable atom which has lower energy.

Qn: I still don’t get it. Why flip-flop like that?

Ans: Sign up for our group tuition lessons, you will understand 4s vs 3d better after some guided practice 🙂

Back to Home of A level JC H2 Chemistry Tuition Specialist